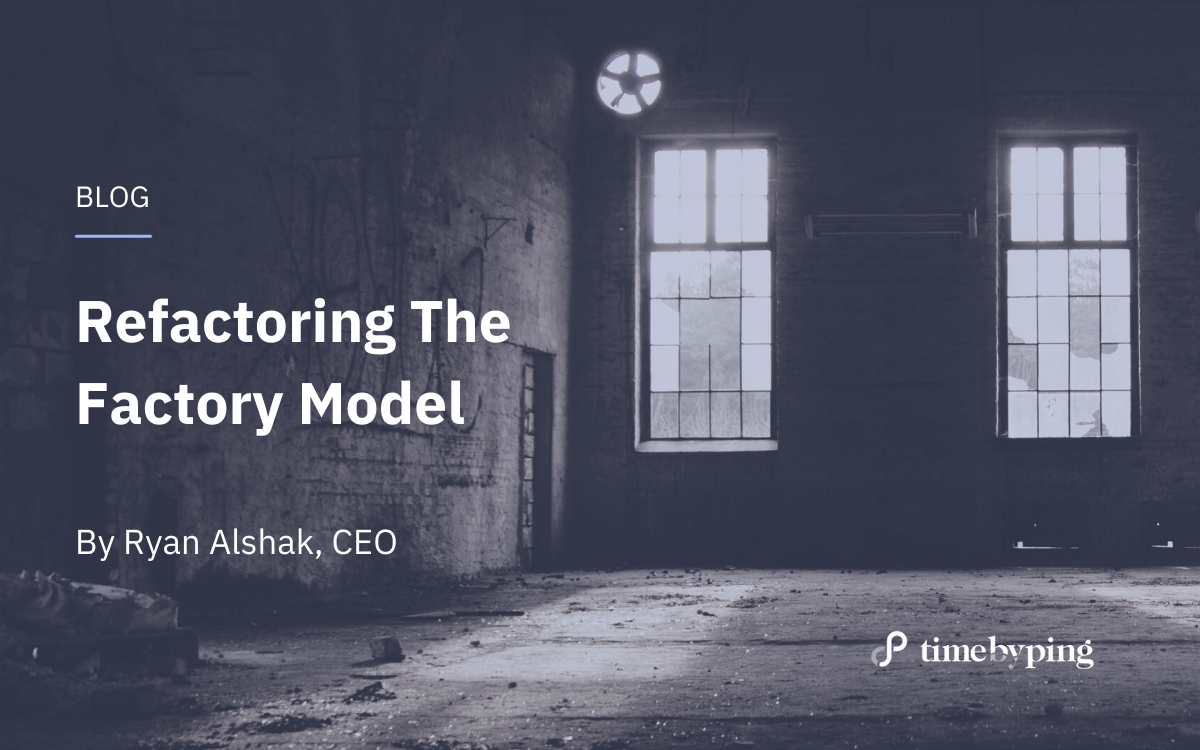 We started Time by Ping to rebuild the working model for the knowledge economy.

Knowledge workers spend, on average, 9 hours a day working but add value for only 3. Sit on that for a second.

10% of our working lives is wasted due to an outdated working model that incentivizes activity over outcomes.

We all look for ways to save time, yet we’re seemingly fine exchanging 3.2 years of our lives for nothing. Only by resolving this paradox will knowledge workers truly be able to spend their time with intention. This is what drives TBP.

Reimagining the working model is audacious, but it isn't unprecedented. Henry Ford introduced the Factory Model when he implemented the moving assembly line. He also reduced the workday from 13 hours to 8 while doubling wages. Conventional wisdom would have you believe that simultaneously doubling costs and reducing hours would lead to failure but the opposite bore true. By empowering his employees with a new tool that enabled them to spend time more productively, Ford doubled profitability in two years.

A century later, this Factory Model still pervades. Yet much has changed in today’s knowledge economy. It’s time for another evolution in the way we work.

We call this transformation refactoring the Factory Model.

Why hasn't this already been done? Because nobody has been able to map time spent to value produced. Industries tied to the billable hour (inaccurately) track time. For them, time equals money, so they incentivize their employees to focus on activity. What results, however, is less clear. The rest of the knowledge economy is driven by outcomes. But these knowledge workers don’t know if they are delivering outcomes most productively because they can’t accurately account for how they spend their day. Only 17% of the 1 billion knowledge workers worldwide actually track their time.

A lack of proper incentives is to blame, as is a dearth of tools enabling knowledge workers to proficiently track time. This is why we raised a $36.5M Series B, to get us one step closer to realizing our vision with Time Automation. Time Automation shifts the timekeeping paradigm from a human telling a machine what they did at work to a machine telling a human. In doing so, it enables knowledge workers to finally understand how they spend their time so they can focus it on making the biggest impact.

Read more about our Series B in VentureBeat, Artificial Lawyer, and LawSites.

Now Is The Time

A lot has changed since we raised our Series A in 2019. These last two years of pandemic have disrupted our every routine. They made us press pause and created space to ask ourselves the question we should have been asking all along: Am I happy with how I spend my time? The answer for most of us was no— travel, long commutes, missing out on family dinners . The pandemic exposed the theater of work and made us increasingly intentional about how we spend time.

The greatest companies are built on macro shifts. Airbnb took advantage of the 2008 housing crisis. Google benefited greatly from the burst of the dot com bubble. Ford was made possible by the invention of the assembly line. This is the “luck” of company building.

The push to work from home was our luck. The tailwinds it generated, which created more demand than we were (previously) able to service, included:

1. Professional service firms scrambled to adopt a cloud-first infrastructure. Firms that embraced cloud thrived in the pandemic; those that didn’t struggled.

3. The shift to WFH has left more and more work with a digital footprint (ad hoc meetings became Zooms, the watercooler became Slack), which has made solutions like Time Automation increasingly valuable.

4. The consumerization of software has led enterprise users to see that their work software should behave like the software they use in their everyday lives. This industry-level demand for modern software is a big lever for retention in the Great Resignation.

5. Revenue-generating software went from a nice-to-have to a must-have.

We raised funding to (1) take advantage of these tailwinds and (2) ensure we compound our first-mover advantage. We wanted to accelerate our opportunity to re-architect individuals’ relationship with time  such that they are in control of it, helping to move from a perpetual state of time famine (not enough time) to time affluence.

The best companies convince the world they were something they didn’t previously realize. Nike made us believe we were all athletes. Apple showed us we were all creators. Shopify convinced us we were all entrepreneurs. TBP will show the world we are all timekeepers, because if there is one asset the world should be tracking, it’s time.

How will we know we succeeded? When knowledge workers work 50% less while being twice as productive.